Directives are the simple instructions and settings which describe how web form pages and user control pages will be processed under any specific framework.

Similarly, ASP.NET are little do-dads which are inserted in ASP.NET pages to control how a page can act according to the characteristics it possesses. These directives are not different from an individual’s personality traits.

ASP.NET directives are generally used to pass optional settings to the ASP.NET pages and compilers which has a typical syntax as follows:

In this article, we will look at many valid types of directives which are described in detail in the following sections. Each directive has one or more attribute or value pairs which can be separated by a space character. Do not have any space between characters surrounded with the equal sign (=) between the attribute and its value.

This directive is used to define application-specific attributes. It is generally the first line in the global.asax file. Here is the sample Application directive:

There are 4 possible attributes which can be used in the Application   which are as given in the table below:

This directive is used to link an assembly to the page or application at parse-time which is analogous to the /reference: command-line switch which is used by the C# and VB.NET command-line compilers.

The assemblies which are located in the bin subdirectory under the applications’ virtual root is linked to the application automatically and does not need to be included in an Assembly directive. There are only two permissible attributes which are as shown in the table below:

For instance – the following Assembly directives link to the assemblies contained in the MyAssembly.dll file by compiling and linking to a C# source code file names SomeSource.cs:

The control directive has multiple possible attributes. A few of them which are more common attributes appear in the table given below: 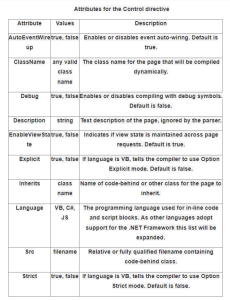 This directive is used in page or user control files and associated code-behind files by specifying a COM+ interface which implements the current page. It allows a page and user control to declare the events, methods, and properties of the interface.

For instance – the Implements directive allows to access a custom IDataAccess interface by containing it in a custom ProgrammingASPNET namespace:

If this directive is contained in global.asax then it applies to the entire application and if it is in page or user control file then it is applied only to the page and user control. Each directive can have a single namespace attribute but if you need to import multiple namespaces, then you need to use multiple Import directives.

The below-given namespaces can be imported into all pages and user controls which do not need to be included in the Import directives: 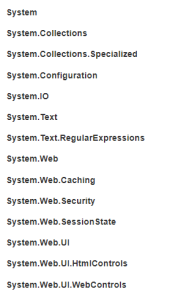 The below-given two lines will import the System.Drawing namespace from the .NET Base Class Library along with a custom namespace: 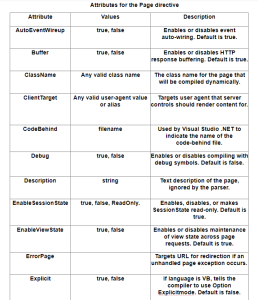 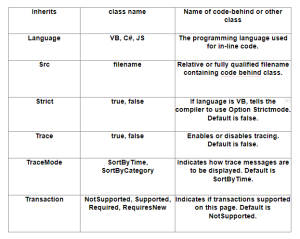 Kibo Hutchinson is a Technology Analyst at TatvaSoft UK which is a .net development company in London. She strongly believes that knowledge is meant to be shared and through this platform she wants to share her insight on .net development. More Posts